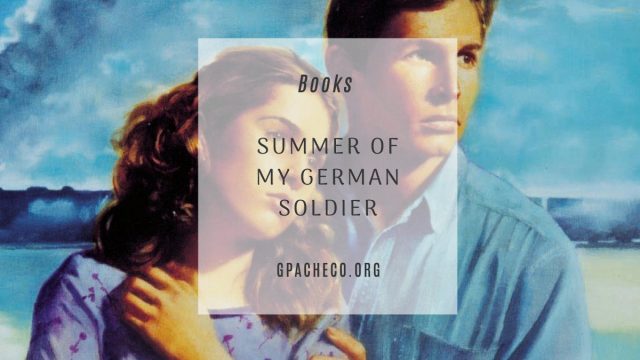 I first heard about the story from a Baby-Sitter’s Club book. True story. I think it was from one of Stacey’s books. So when I saw it at my used bookstore, Twice Sold Tales, I snapped it up for cheap.

Patricia Ann Bergen is a 12-year-old Jewish girl living in wartime Arkansas. I guess it was customary to send POWs to America during World War II. I have never heard of such a policy before. But the author, Bette Greene, based it on her childhood in the South. So I assume she went through or knew someone who did go through what Patty did.

She is a lonely girl. She is the bane of her parents’ existence. She makes up fanciful stories as 12-year-olds are wont to do. She hates wearing dresses, and her hair is always a mess. Her father is not affectionate with her and is hair-trigger abusive. Her aloof and beautiful mother constantly compares Patty’s looks to her baby sister Sharon and worries about her figure. Sharon looks like their mother but is completely unaware of the power that she holds because of it. The Bergens run a department store in town and leave the house tended by their black maid, Ruth.

She has no real friends. The girls she was semi-friends with at school are at Bible camp for the summer. Her parents didn’t want her to go to Bible camp, even though she swore to lie about loving Jesus and everything. So when she meets Fredrick Anton Reiker in her parents’ store by chance, she thinks it’s a dream come true. She believes she has made a friend.

Anton speaks perfect English and is articulate and educated. He also behaves nothing like the soldier that they say he was. As many other people were during that time, Patty believed that all Nazis were the worst of their stereotypes. She meets him and questions what they had told her about him. Being 12 years old, you are at that odd age when you don’t always do what you’re told, and you trust your instincts more.

Using a bit of skill, Anton escapes from the POW camp and runs across Patty again. Patty harbors him in a boarded-up garage owned by her family that doubled as her hideout for a few days. Their friendship blossoms, but it’s perfectly innocent. I want to think Patty matured considerably from meeting Anton. He exposed her to great authors in their short time together and made her feel worthwhile.

When Anton realizes it’s time to move on, he does so at great peril. Patty’s careless mistake casts a cloud of suspicion over her family to the point where the small-town mentality becomes its stereotype. I don’t want to spoil it. But it’s sad what the townsfolk do to the Bergens.

At the heart of it, it’s a coming-of-age story about a misunderstood girl. As such, the ending was unsatisfying to me. It left me wanting closure. But what was so unique was that I didn’t expect one. Does that make sense? I mean, there weren’t any redeeming qualities about the characters that made me feel as though they were capable of improving. No one listens to 12-year-olds. There was no chance in hell Patty had of fixing the wrongs in her life. No way, none. The ending is emotionally brutal in that sense.

The book is more suited for young adults. I’m sure if I had read it when I was younger, it would have had a more significant effect on me than it does in my mid-twenties. I would recommend it to girls Patty’s age and those who are struggling with their identity.

Twenty years from now you will be more disappointed by the things you didn't do than by the ones you did. So throw off the bowlines, sail away from the safe harbor, and catch the trade winds in your sails. Explore. Dream. Discover. Unknown