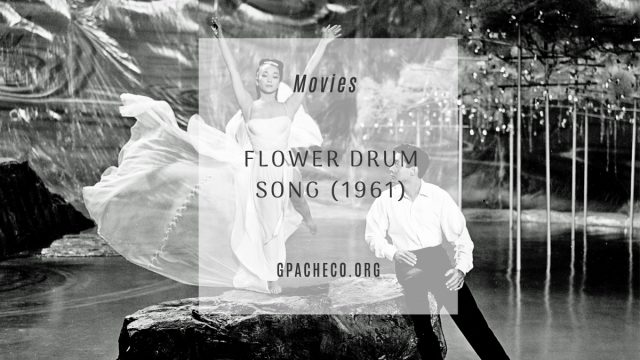 Being an American of Asian descent and an avid student of classic Hollywood, Flower Drum Song was on my must-watch list for many years. It’s known as being the only musical meant for an all Asian American cast. Notice I didn’t hyphenate. Several of the characters were presented as Americans who happened to be Asian, which was a huge deal at the time. It still is, which goes without saying.

Seeing the casting atrocity that was 21 played out within the Asian American community, I am hyper-aware of the representation that we have as a community onscreen. It’s a dialogue but sometimes, it feels like we are screaming into the void.

But before I get any further, the actor who played Wang Ta, was so damn handsome.

Be still, my heart! I was mesmerized every time he was onscreen.

The whole catalyst of the story begins when Sammy Fong tries to pawn off Mei Li to college student Wang Ta. Mei Li is a fob, who is also Sammy’s picture bride. She wasn’t expected to arrive for another five years but stowed away on a boat with her dad.

According to Wiki, the practice was solely Japanese and Korean, but I could swear I studied Chinese picture brides as well. Probably in my History of Photography class.

It so happens that Wang Ta’s father Wang Chi-Yang has been looking for a suitable bride for his Number One Son. Master Wang Chi-Yang is sort of the overbearing, stereotypical Asian dad type, who says stuff along the lines that he’ll let his son know when he’s old enough to make his own decisions.

He instantly approves of Mei Li when they meet but his sister-in-law Madame Liang insists that Wang Ta and Mei Li fall in love naturally because “that’s the American way.” She’s been taking citizenship classes to become an American. So, of course, she knows what she’s talking about!

There are clear problems with the story, in that it does sort of play up the azn stereotype of the time. Linda Low is introduced as that stereotypical girl of her time: her goal in life is to get married. “I Enjoy Being a Girl” is such a goofy song but it’s iconic.

I have to look at it from that talking point and nothing more. Her character manipulates Wang Ta into getting a marriage proposal out of her boyfriend, Sammy. They’d been together secretly for five years and no proposal.

Wang Ta meets Linda on a double date with other people and gives her his pin on their first date. Linda plays the stupid girl stereotype to the hilt in her interactions with Wang Ta, but she’s a clever one. She knows exactly what she’s doing.

She doesn’t tell him that she’s a dancer at Sammy’s nightclub. Back then, being an entertainer was frowned on in Asian cultures. It might even be true today.

My dad sometimes calls the people on the variety shows on TFC “commoners.” It doesn’t stop him from watching it though. Of course, keeping such an explosive secret like that completely backfires eventually.

This is a musical, after all.

Mei Li’s character is sort of this stereotypical diminutive fob that people all assume Asian girls are supposed to be. Not that I didn’t love her, because I did. I was rooting for her and Wang Ta to get together (which they do, SPOILER ALERT!!). They fell in love at first sight, despite it being an arranged marriage.

There were things going on that involved Sammy and Linda that kept them apart until the last five minutes of the film. Her characterization irked me, only because I have a modern lens. If my future husband’s family expected me to wait on them hand and foot and to be a meek little thing, I’d have to set them straight with extreme prejudice.

I saw some subtle similarities to Guys and Dolls one of my favorite musicals.

Then on top of all this tension-filled confusion, there is the subplot of Helen Chao. She has been in love with Wang Ta for years. She’s been Linda’s seamstress at the nightclub. Helen’s meddling made Mei Li fall out of love with Wang Ta briefly. Her musical number, “Love, Look Away” was so beautiful. We all knew her unrequited crush on Wang Ta would get her nowhere. I guess in the original book, she committed suicide.

Overall, I loved it. It was fun, light-hearted, and silly; a lovely, all-around musical. It wouldn’t play well today since the libretto was written by Rodgers & Hammerstein. Seriously, what do white folks know about Asians if not our stereotypes? If someone were to remake the film (and not just a revival on Broadway), they’d have to leave it in its time period of the late 50s, early 60s methinks.

Oooh, if you have never been to Alaska, go there while it is still wild. My favorite uncle asked me if I wanted to go there, Uncle Sam. He said if you don't go, you're going to jail. That is how Uncle Sam asks you. Bob Ross, The Joy of Painting