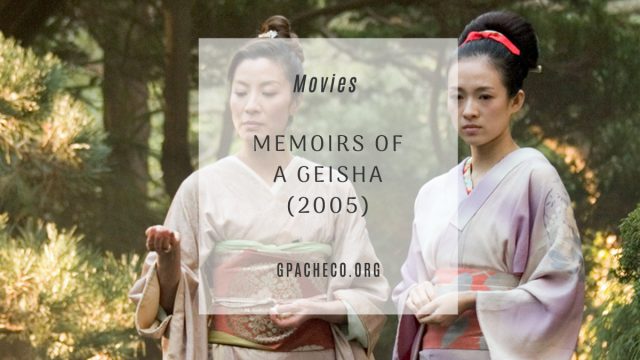 I accept that with book-to-movie adaptations, things will be tweaked, left out, or over-dramatized when they meant little to the book’s plot.

The film version of Memoirs of a Geisha barely captured the spirit of the book, and there was plenty left out that could’ve been added to make it a more compelling film.

Of course, all the hype surrounding the fact that most of the leading cast were of Chinese descent – not Japanese – stayed in the back of my mind when I watched it.

It was hard for me to suspend my disbelief that they cast Chinese actresses familiar to global audiences in what is essentially a love letter to and about pre-and post-World War II Japan.

Maybe because I am of Asian descent, I can identify the subtleties between the different ethnicities of Asia.

One could argue that the author is a white guy with a vivid imagination, and they had stakeholders who wanted their money back, and to sell the movie to a bigger audience, they would need to make this movie in this way.

I’m sure there are talented actresses of Japanese descent who could have pulled off the roles. Who knows? It could’ve been their breakthrough, and they could have become stars because of it.

Not to mention the wartime atrocities Japan committed against China, but that’s for another article on another day.

The film starts at the tipsy house of the protagonist Chiyo. There is a significant change from the book. First, Mr. Tanaka purchases Chiyo and her biological sister Satsu. Then they’re taken from their home against their will.

In the book, they spend time with Mr. Tanaka and his family, and Chiyo is under the impression that because her mother is dying and her father is old, Mr. Tanaka will adopt them.

Maybe this is the Harry Potter geek in me. Still, I was expecting everyone surprise at Chiyo’s stunning eye color (blue-gray, given to her by her mother, who had too much water in her, which is related to Chinese astrology) to flick their eyes to her forehead and search for a scar.

The only characters who were close to their book counterparts were Hatsumomo and Pumpkin. What surprised me was that the viewer felt that Pumpkin’s name was given to her before Chiyo ever sets foot in the Nitta okiya. Chiyo gave Pumpkin and Dr. Crab their nicknames.

I was glad that the film version of Mameha made it a point to explain what a geisha truly is.

“Remember Chiyo, geisha are not courtesans, and we’re not wives. We sell our skills, not our bodies. We create another secret world, a place only of beauty. The very word geisha means artist, and to be a geisha is to be judged as a moving work of art.”

That sums up everything nicely. Yet, to the Western world, geisha are prostitutes, and their roles are shrouded in mystery.

One thing that bothered me was the way Chiyo (Zhang Ziyi) walked in her kimono. Geisha take small steps in their slippers because of how elaborate their kimono is. On the other hand, Ziyi walked as if she were walking in a dress, taking significant steps.

I know that’s a bit nitpicky, but if you’re going to be a geisha, own it and do it right.

Also, I didn’t see any chemistry between Sayuri and the Chairman throughout the entire film. Well, maybe a little when they first met on the bridge, but even that was platonic chemistry.

Maybe it wasn’t time to do this type of film, though it had the support of some amazing behind the scenes players, such as Steven Spielberg’s Amblin Entertainment production company and director Rob Marshall, because according to its Wikipedia article,

“The film had a lukewarm reception critically and financially in the States managing only $57.0 million dollars during its box office run.”

Overall, the film version of Memoirs of a Geisha was a reasonable effort, though it could’ve done much better. I would recommend reading the book (paid link).

I always wonder why birds choose to stay in the same place when they can fly anywhere on the earth, then I ask myself the same question. Harun Yahya