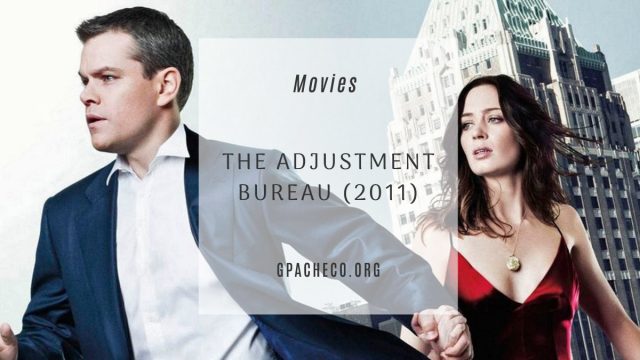 The trailer for “The Adjustment Bureau” paints the movie as an edge-of-your-seat thriller. However, it was more of a slow-burn thriller, if that makes sense.

“The Adjustment Bureau” follows the life of David Norris (Matt Damon). He’s an aspiring politician with dirty laundry and his “chance” meeting with dancer Elise (the always lovely Emily Blunt) in a men’s bathroom at the Waldorf Hotel in New York. Their attraction is immediate, and they kiss.

The thrust of the story is when David cannot leave Elise alone. Harry Mitchell (Anthony Mackie) – David’s caseworker – fails to delay David from arriving at work five minutes after he was supposed to. By “chance,” he meets Elise again, and he gets her number. On top of that, he catches the Bureau making an “adjustment” on his friend Charlie (Michael Kelly).

After a short chase, Richardson (John Slattery) tells David what the Adjustment Bureau does: everyone follows a path. The Bureau makes sure these things happen for certain people. David is one of those people they have been keeping an eye on. They’re trying to guide his life and career so that he becomes President of the United States.

David spends the next three years trying to find Elise. When he does find her again, he refuses to heed the Bureau’s original warning: forget about Elise. He’s in love. Real Love. The One. That love we all dream about here. Full stop. End of line.

Through a series of “adjustments” from the Bureau, they do everything in their power to make sure he stays on his path, even if it means keeping them apart. David becomes incredibly paranoid about men in hats. That was a great plot device: the caps. I’m now officially paranoid of men in fedoras.

When they fail to convince him, they kick his case upstairs. They call in Thompson (Terence Stamp), who is one of the best adjusters out there. Thompson warns him one last time to leave Elise alone. Unfortunately, the adjustment Thompson gives her forces her to sprain her ankle during a live performance. Against his better judgment, David walks away to save her life.

She became the successful dancer she was meant to be and prepares to marry her ex-boyfriend. Unfortunately, David has been miserable, and Elise thought he didn’t love her (he ditched her in the hospital). The imminent threat from the Thompson and the Bureau is hanging over him, but he goes to visit her at the courthouse on her wedding day, with Harry’s help.

Apparently, in a past plan, David and Elise were supposed to be together. But because of chance and the way they lived their lives, it deviated, and the Bureau had to adjust accordingly.

The Bureau answers to “The Chairman.” If you’re keeping up with this, the Chairman is God, and the caseworkers His angels. I love that idea. Some people were born to become great men and women, and they were guided down their proper path by the Bureau, with slight “adjustments” here and there. The Bureau cannot control thoughts, but they can twinge people’s minds to think of a sure way to accomplish things.

However, we have the power to fight against these so-called adjustments. Thompson tells David that free will as we know it isn’t free will at all. It was adjustments from the Bureau that caused the rise and fall of humanity. But David and Elise buck the system once he tells her what’s going on.

“The Adjustment Bureau” has a fascinating premise. It makes you think once you leave the theater. The question that I’m left with here is, what makes people so great that they catch the eye of the Bureau? Harry explains that they can’t watch everyone but those that they can, they adjust. It makes you question yourself. Have I been adjusted? Am I doing what the Bureau is guiding me towards, or am I just one of the ones that aren’t on their radar?

I would recommend this movie, particularly if you like the idea of destiny and free will controlled by a higher power.