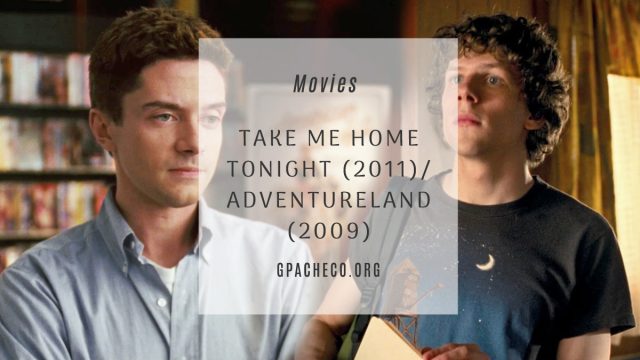 This is a joint movie review because their premises are the same: 1980s male college graduate goes home after graduation pondering his future (played by Topher Grace and Jesse Eisenberg respectfully), gets a job beneath him to tide him over (Topher’s Matt: Suncoast Video, Jesse’s James: theme park worker), struggles to find himself, falls in love with a manic pixie dream girl of varying degrees (Teresa Palmer’s Tori, Kristen Stewart’s Em), and discovers fascinating things about himself.

The one glaring difference between the premise of each is that James in “Adventureland” needed the job to go to Columbia to get his Master’s.

Matt in “Take Me Home Tonight” didn’t know what he was doing with his life. However, the storylines that propel them to the end are strikingly similar.

So what am I going to comment on here? The fact that these movies were made and marketed to appeal to omega males. I was going to reference Urban Dictionary, but their definitions are all over the place.

Girls of similar ages and backgrounds go through the same things these boys are. So why hasn’t anyone done a movie like that for us females? God forbid we ask Hollywood to tell stories like that.

If someone could do a movie like these as humorously as they did, and on the same level, I think it’d be a hit.

But it’d have to be self-deprecating and wouldn’t wussy out like a romantic comedy. It has to be crass, unflinchingly honest, and accurate.

I’m kinda iffy about the soundtrack for “Take Me Home Tonight.” It was supposed to take place in 1988, and a lot of the music seemed anachronistic. That’s the complaint I had for “Watchmen” too.

The filmmakers slotted in “Safety Dance” during a hilarious scene. But “Safety Dance” came out in 1982. I don’t think I’d be bumping a song from ’82 in ’88. I have a hard enough time bumping a song from 2003 in 2010! No Michael Jackson or Madonna either. Two of the most significant artists we associate within the 1980s, and no appearance from either.

On the other hand, “Adventureland’s” soundtrack nailed it. The cinematography made it feel too modern, but the soundtrack helped keep it grounded in the late 1980s.

I will give both movies because the boys were pursuing the girls show that the girls don’t have it together either. Teresa Palmer’s Tori loathes her full-time job; Kristen Stewart’s Em is all sorts of fucked-up. But that doesn’t let them off the hook. I think seeing the movie from the girls’ eyes would’ve made a fascinating story too.

Born in the 1980s and grown up in the 1990s, I’ve noticed that these self-discovery movies have a cycle. Every twenty years, someone makes a movie about their adolescence (high school/college), making it more relatable. We’re still discovering how young adults function in the 2000s. So it’s easier to digest these personality issues when it’s placed in an era that we know through and through.

Overall, I enjoyed both the movies for what they were. I couldn’t have imagined a better ending for either. They both met their natural end without taking away from the lessons we learned about each of the boys.

When I call him a son of a bitch I am not using profanity, but am referring to the circumstances of his birth. Huey Long