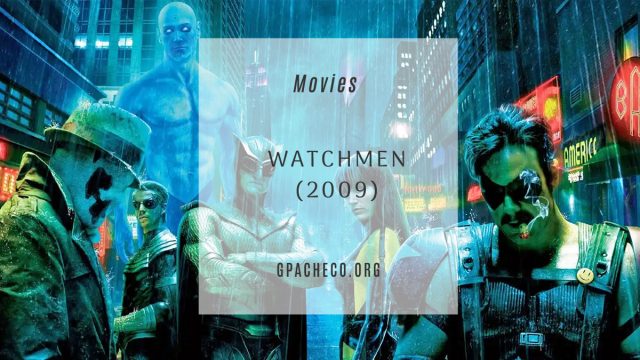 You can’t watch this movie just once. You’ll need to see it a few times to get everything. Wired was making a LOT of constructive criticism during the marketing campaign for the movie.

They filled in many blanks that I was bound to miss because I didn’t read the comics beforehand.

The whole movie had shades of September 11th to it. That was a big point made in the reviews and summaries I’ve read. It was set during the Cold War.

I had a problem with that because, to me, that era continues to inform current events. I was being a student of history and doing a paper on the effect of visual media on the Vietnam War; seeing this movie reinforced that for me.

What I like about the Watchmen is that they’re not “superheroes.” At least not in the sense that we know them, like leaping tall buildings and running faster than a speeding train. They’re humans who fight crime with masks on.

They have badass fighting skills, but they can be human emotions, such as love and knowing the difference between right and wrong.

I thought there was a lot to think about that the only one with powers is Dr. Manhattan, and he lost his humanity.

The death of the Comedian (Jeffrey Dean Morgan) is the inciting event for the audience to meet the team and get into their world. We see his death play out, and the bulk of the Comedian’s role is in flashbacks.

Watch the opening credits very closely for an exciting take on a particular assassination in Texas. Maybe you’ve heard of it?

Rorschach was one of the best characterizations for an antihero I have seen or read about forever. Wow. I was sold on him from the start. Jackie Earle Haley nailed his alarming personality. However, you have to see it to believe it in the context of the movie.

The attempted rape of Silk Spectre I (Carla Gugino) was disturbing. But, of course, it’s always the woman’s fault if she wears sexy clothing. I hardly ever turn away from the movie screen, but during that scene, I had to.

As such, the women in the film were decidedly anti-feminist. I know Alan Moore treats his women like that, though. But that doesn’t mean I approve of it!

Silk Spectre II – her daughter Lori, played by Malin Akerman – seemed like such a bubblehead. She breaks up with her boyfriend Dr. Manhattan (Billy Crudup), goes straight to Nite Owl’s home (Patrick Wilson), and later on, they get it on.

You just broke up with your boyfriend, so you go to your best guy friend to get a piece? That sex scene seemed out of place. If it’s in the source material, I’ll let it go. But damn. Keep your legs together, girl! Another thing, her hair didn’t scream of the 80s at all.

Ozymandias – the smartest man in the world – is played by one of the gorgeous people on the planet, Matthew Goode. He captured that debonair millionaire playboy archetype. But being that smart does have its consequences, which seem shady to me. Fit the movie, though.

The soundtrack smacked of the 1980s and in the wrong ways. You know me & music. An incorrect song can throw off the whole tone of the scene for someone like me. For example, “Unforgettable” by Nat King Cole, Jeff Buckley’s “Hallelujah,” “99 Luft Balloons” by Nena, MCR’s cover of “Desolation Row” in the credits.

Case in point: Ozymandias’ TV screens play Robert Palmer’s “Addicted to Love” video during the final scenes. The movie took place in 1985. That didn’t come until 1987. As a result, anachronisms abound in the soundtrack. If you’re okay with an 80s vibe to your soundtrack, then fine, this probably won’t bother you in the least bit. But it did to me.

I would recommend seeing it for yourself. But be prepared to hate it, like everyone else. Maybe more “meh.” It’s not an escapist film. You will leave the theater asking too many questions and feeling that a lot of things that were happening could have happened (or could still happen!) if we let it.