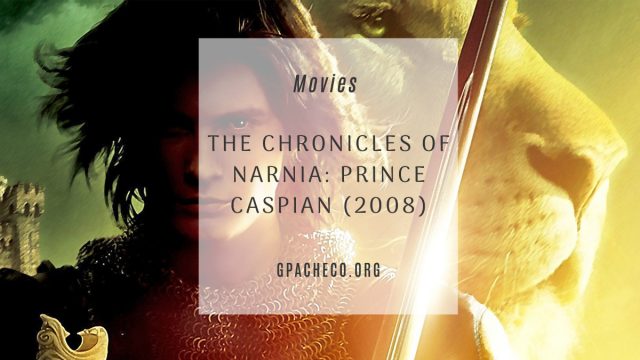 The Chronicles of Narnia: Prince Caspian was perfect. In most book-to-movie adaptations, you lose things as the filmmakers try to translate the book’s spirit. But I think the filmmakers captured the essence of the book. And Caspian is my favorite character from the series.

I will concede that they deviated from the book in crucial parts (I’ll try not to post spoilers). However, I will say that the flirting glances (and the ultimate resolution) between Susan and Prince Caspian set this little fangirl on fire. Caspian is with Ramandu’s daughter, dammit.

I remember reading an interview early on in production about how the director wanted to focus on how hard it was for the Pevensies to adjust to being children in 1940s England after being royalty in Narnia. So, naturally, I was looking forward to seeing how that played out, and I wasn’t disappointed. William Moseley captured that emotion perfectly. But, of course, I would be freaking emo, too, if I was ripped away from paradise by accident.

Especially if I had been there long enough to age as much as they did, you do have to be somewhat familiar with the first film to get some things that happened in Prince Caspian (especially if you don’t read the books), but it’s pretty good on its own.

I will admit that it dragged in some places, like during the siege of Miraz’s castle. But I’m afraid I have to disagree with many reviewers who said there wasn’t much character development. Some examples that spring to mind are the scenes between Lucy and Aslan in her dreams, Susan and Lucy in the forest trying to get to Caspian with the others, and Peter and Lucy near the Stone Table.

Both Peter and Susan asked why they didn’t see Aslan, and they questioned why. I’m glad Aslan explained it; I was afraid they were going to forget! I think that he will help the transition between this film and Voyage of the Dawn Treader. I hope that the receipts from this film will be impressive enough for them to continue making the series. I want to see Silver Chair already!

I don’t think it was explained on film how Miraz ended up dying in the ring unless I wasn’t paying attention. I only covered my eyes once, and that was during the goodbye between Susan and Caspian.

I mean, I know how he ended up getting killed from the book, but maybe it was too subtle for me to catch on film. Or perhaps I was looking for it so hard I missed it. But, I thought that was an essential part of the storyline.

Edmund had the best lines in the whole film. And he made the best of them. I can’t wait to see him do a movie that’s not Narnia-related. And I realized that Anna Popplewell (Susan) was in my favorite adaptation of Mansfield Park with Jonny Lee Miller. I saw the scene when Fanny goes back to her family, and I saw this little round-faced, dark-haired girl, and I’m like, “That looks like Susan!” And it was!

When I first saw Lucy in the film, I couldn’t believe how big she’d grown, and I can’t wait to see her in Dawn Treader. I think she’s developing nicely as an actress.

Reepicheep is my boy, erm, mouse. Eddie Izzard completely captured him. So prideful, unwilling to back down from a fight he knows is, believing until the end. The evolution of Trumpkin was so remarkable to see. There’s something to be said of not believing in something or someone. And that’s not a religious theme, but more of a personal growth idea.

I just read that Peter Dinklage (who played Trumpkin) said his character was more for the cynical adults in the audience who don’t believe in what Narnia stands for. So he was sort of their mouthpiece throughout the film.

I also cannot wait to see Ben as Caspian in Dawn Treader and, to a lesser extent, Silver Chair (because we know what happens to him in that book). I wasn’t sure how the Spanish style for the Telmarines would fly because I hadn’t read them as of Spanish stock, but it worked out pretty well.

When I reread the book, that’s how I’m going to hear their voices in my head, haha. I LOVED the battle scene between Peter and Miraz, from Edmund delivering the decree to Miraz getting shanked at the end.

Fall in love... or fall in hate. Get inspired or get depressed. Ace a test or flunk a class. Make babies or make art. Speak the truth or lie and cheat. Dance on tables or sit in the corner. Life is divine chaos. Embrace it. Forgive yourself. Breathe. Enjoy the ride. Solbeam